OPINION— The collusion circus is coming for Jill Stein. The US Senate Intelligence Committee has asked the 2016 Green Party presidential candidate to hand over documents amid accusations she was part of a Russian plot to elect Trump.

The news was met with delight by some pro-Hillary Clinton Democrats who have long expressed a visceral hatred of Stein simply because she had the audacity to run for president — an act which they say hurt their candidate’s chances of winning by unnecessarily splitting the vote on the left. In the greatest democracy in the world (supposedly) Stein committed the unforgivable sin of running for office and winning some votes. There can only be one explanation for this, the ‘Russiagaters’ say: Stein was a Russian plant, designed to pull votes away from Clinton to tip the election in Trump’s favor. In their increasingly warped minds, nothing else could possibly make sense. 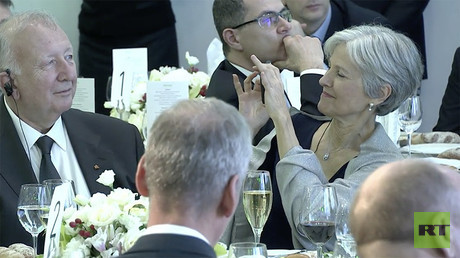 Never mind that Stein also ran for president in 2012, ran for governor in Massachusetts in 2002, as a candidate for the Massachusetts House of Representatives in 2004, for Massachusetts Secretary of the Commonwealth in 2006 and for Massachusetts governor again in 2010 — all of which she lost. Given her track record of not winning, it’s hard to believe Putin would choose Stein to pin his hopes on as the candidate to pull most votes away from Clinton in 2016. But anything is possible, right? Maybe Stein has been a secret Russian asset lying in wait all this time. That, apparently, is what some loony Democrats would have us all believe.

In the real world, however, there is absolutely no reason to believe Stein has anything to do with an alleged Russian plot to elect Trump — evidence for which also remains elusive. Stein’s primary transgressions are as follows: In 2015, she attended a gala event to mark RT’s tenth anniversary in Moscow, where she (god forbid) sat at the same table as Vladimir Putin. Rumors abound that Russia paid for Stein’s trip to Moscow, an accusation which she strongly denies (and claims she has the receipts to prove it). Perhaps even worse than setting foot on Russian soil though, Stein has often dared to express opinions that don’t sit well with establishment Democrats (or Republicans). And well, that’s basically it as far as the evidence for her “collusion” with Russia goes.

2017: Having dinner in Russia with their president means you have to defend yourself in front of Congress.

History is fun. Pick up a book and read it so you don’t repeat the bad parts.

But lack of evidence proving Stein has anything to do with the Russian government hasn’t stopped her critics from making wild and defamatory claims. Zac Petkanas (whose Twitter bio describes him as a former “director of rapid response” for Clinton’s 2016 campaign) declared on Twitter this week that “Jill Stein is a Russian agent” — a sentence which he pasted eight times into the same tweet. If that’s the kind of “rapid response” Petkanas was having to Clinton campaign crises (of which there were many) it’s no wonder she lost.

ThinkProgress, which bills itself as a “progressive” platform has devoted an article to Stein’s “pro-Kremlin talking points” and detailed a list of her “odd views” — some of which include not loving NATO, not hating Julian Assange, not hating RT and not hating Russia in general. Those, of course, are all big no-nos if you want to avoid a congressional investigation these days.

But the ThinkProgress piece is typical of the kind of coverage Stein received throughout the election campaign, too. In one particularly bad example, Vice published a mocking piece dripping with disdain for the candidate. It was headlined ‘Everybody Hates Jill’. At one point, the author proudly states she has “ridiculed” and “mocked” Stein on other occasions, too, lest we assume it was only the one occasion.

This is a perfect example of how American journalists treat third party candidates in their own country while pretending to care deeply about tiny opposition movements in countries like Russia. @DrJillStein pic.twitter.com/Qy6bCKlNLy

That’s the kind of farcical and unserious coverage third-party candidates receive in the US — and the journalists who do the mocking, treating candidates like Stein as an amusing sideshow, are very often the same journalists who pretend to care deeply about the lack of fair coverage which tiny opposition movements receive in countries like Russia.

This is a witch hunt. It is neo-McCarthyism, plain and simple. The people who are outright calling Stein a Russian agent are making a complete mockery of themselves and of the American political process — and they genuinely appear to have no idea. One almost feels a sense of second-hand embarrassment for them. With the frenzy around Jill Stein, they have managed to spin a scandal out of nothing, because, for lack of a better word, they’re butthurt that their candidate didn’t win.

Dragging Stein into this mess has been instructive in one sense, however. If nothing else, it shows Clinton Democrats up for what they really are. It proves that the ‘Resist’ crowd’s crusade is not just about Trump and «collusion» — it’s also about discrediting all dissenting American voices and establishing their own definition of what political opposition is supposed to look like — and for the Clinton cult, it’s not supposed to look like Jill Stein.

Of the infamous RT dinner in Moscow, Max Blumenthal (who attended the event) wrote for Alternet: “None of us had any inkling the festivities would come to be seen as a de facto crime scene by packs of Beltway reporters and congressional investigators.”

Jill Stein had dinner with Putin, so… GET THE GUILLOTINE! That’s how we roll in this country now. Didn’t she know it’s illegal to eat with Russians?

But that’s just how far we’ve come. Anyone who disagrees with the Democrats is a Putin puppet — and if you’ve ever been to Moscow, forget it — don’t even bother trying to defend yourself. Off with your head.

Speaking of traitors, actress Lindsay Lohan was spotted wearing a baseball cap with the word “RUSSIA” emblazoned across the front this week. Perhaps the celebrity D-lister and possible Russian agent will be the next one dragged into the dock for questioning.

Danielle Ryan is an Irish freelance journalist. Having lived and worked in the US, Germany and Russia, she is currently based in Budapest, Hungary. Her work has been featured by Salon, The Nation, Rethinking Russia, Russia Direct, teleSUR, The BRICS Post and others. Follow her on Twitter @DanielleRyanJ, check out her Facebook page, or visit her website: danielle-ryan.com