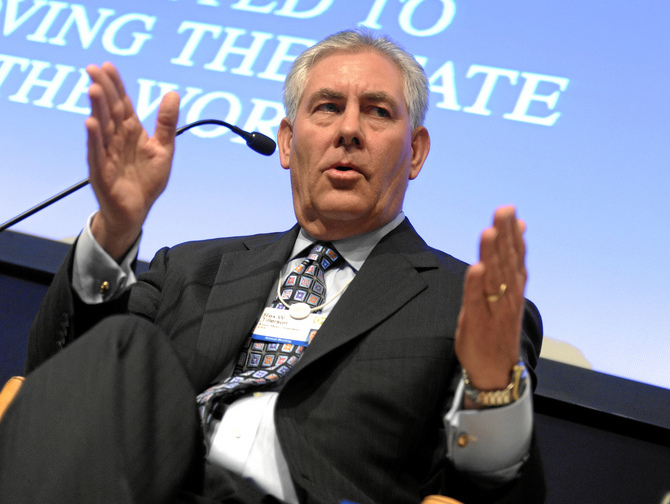 Chairman and Chief Executive Officer of ExxonMobil Rex W. Tillerson, featured, at the World Economic Forum in Davos, Switzerland, January 2009. Tillerson’s paycheck reached $40.2 million last year, which the Securities and Exchange Commission might require him along with other company CEOs to compare their salaries with the folks who work for them. (Photo/World Economic Forum via Flickr)

The Securities and Exchange Commission (SEC) could soon require Fortune 500 companies to publish CEO salaries compared against the wage of an average worker. Proponents claim that it’s a matter of transparency that would help illustrate the large, growing wage gap. Independent estimates by the AFL-CIO show that the average top corporate CEOs earned $12.3 million last year, about 354 times the average wages of employees at the same companies.

CNN Money reports that the SEC has not finalized its proposal, but a final decision on the requirements is expected soon.

The requirement is a key provision of the 2010 Dodd-Frank Wall Street Reform and Consumer Protection Act passed in the wake of the 2008 financial collapse. The legislation included provisions designed to increase oversight and transparency in corporate America, including pay scales.

«It’s long overdue, and of the 400-plus rules from Dodd-Frank, it’s the simplest,» said Bartlett Naylor, financial policy advocate for Public Citizen, a consumer advocacy group.

The rules requiring companies to publish salaries have been delayed, in part because of resistance from corporate leaders who say obtaining the data is difficult and unhelpful. A group of CEOs writing to the SEC last year claimed that there are «significant hurdles and burdens” in collecting this information.

«Companies have no business purpose to collect that information globally,» said Tim Bartl, president for the Center on Executive Compensation.

As the pay gap appears to be growing, companies could be trying to avoid negative media attention at a time when thousands of fast food workers and Walmart employees demonstrate for better pay, union representation and respect at work. In 1980, a Fortune 500 CEO earned only about 40 times that of an average employee at his company according to one report by Business Insider.

Fast-forward 22 years and McDonald’s CEO Don Thompson earned $13.8 million in total compensation for 2012, up 237 percent over the company’s CEO pay for 2011. Many fast-food employees who earn less than $10 an hour say that they deserve a raise.

«I know I’m risking my job, but it’s my right to fight for what I deserve,» said Julio Wilson, a fast food worker at a protest last month. Wilson earns $9 an hour at a fast-food pizzeria and says that he struggles to support himself and his 5-year-old daughter, according to a USA Today report. «Nine dollars an hour is not enough to make ends meet nowadays.»

Wilson was one of thousands who protested low pay during the latest nationwide fast-food workers strike last month. Workers and their supporters picketed in front of fast-food restaurants in nearly 60 cities demanding $15 an hour and the right to form a union without intimidation.