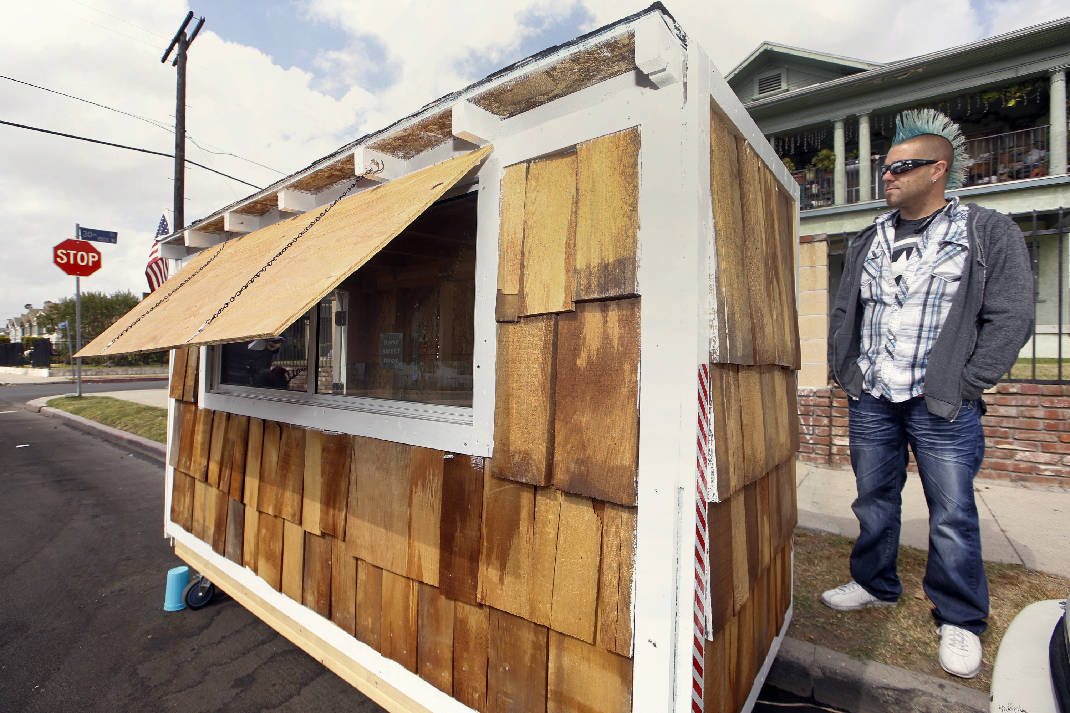 Tiny Homes For The Homeless Now Under Attack In California

Los Angeles resident Elvis Summers poses with his tiny house on wheels he built for a woman who had been sleeping on the streets in his South Los Angeles neighborhood on Thursday, May 7, 2015.

Personal liberty is under attack in so many areas of American society, and combined with a faltering economy, people are in greater need than ever of finding ways to survive economically while still maintaining basic freedoms.

The tiny house movement is one of the many creative ways in which people are out-smarting the matrix of consumerism and debt. Recently, however, we reported on the federal government’s attempts through the Department of Housing and Urban Development to make owning and living in a tiny home more difficult for those who wish to do so.

It seems this is an important issue for many, and even the infamous website Snopes, in its typical mainstream, ‘nothing to see here folks,’ fashion, has chimed in on this debate claiming that concern over the HUD’s updated regulations are simply false, citing various interpretations of the new HUD regulatory changes to make their case.

Well, not so fast. We know how government works to corral people into compliance and conformity with its ever-expanding rule sets, and however you interpret the HUD’s intentions over the regulation of tiny homes, there is more to this story, as state and local governments are themselves making it more difficult than it should be in some areas to choose this type of simple, affordable lifestyle.

Tiny homes for the homeless are an idea started by long-time L.A. resident Elvis Summers who wanted to help a 60-year-old homeless neighbor who was always sleeping in the dirt. The movement has been gaining momentum in the L.A. area as way to extend compassion to the city’s least fortunate. Hundreds of thousands of dollars have been donated to this effort, and dozens of tiny homes have been built and donated by caring residents who have worked hard to see to it that the most downtrodden in their communities have some type of basic shelter.

Since establishing the My Tiny Houses for the Homeless in Los Angeles (MYTHPLA) project and Starting Human nonprofit last year, Summers and his volunteers have built and placed 37 tiny homes between Inglewood and Van Nuys. [Source]

The homes take up very little space, but offer a tremendous amount of dignity and peace of mind for those fortunate enough to have one.

The homes, which are about the size of a parking spot and come equipped with lights, windows and doors that lock, are designed to offer a safe space for some of the city’s tens of thousands of homeless residents. They have been funded by nearly $100,000 worth of donations since last April. [Source]

The bureaucratic reasoning for outlawing and confiscating these structures is typical of big government, and citing safety concerns and general disgust for something that does not fit in with the established paradigm, city sanitation officials have been stealing these properties from the less fortunate and destroying them. For their own good, of course.

“Unfortunately, these structures are a safety hazard,” says Connie Llanos, a spokeswoman for LA Mayor Eric Garcetti. “These structures, some of the materials that were found in some of them, just the thought of folks having some of these things in a space so small, so confined, without the proper insulation, it really does put their lives in danger.”[Source]

Really, their lives are in danger not from being homeless in a city that spends millions in subsidies for higher socio-economic groups, but from having a makeshift roof over their head? Typical.

Furthermore, a Waking Times reader has alerted us to actions by both Sonoma County and Petaluma, CA city officials to derail efforts by local citizens to establish a “Little House on the Trailer” park, where people would lawfully be allowed to pursue this simple, affordable lifestyle in one of the nation’s most expensive counties.

Sonoma County, CA and Petaluma, CA both gave Little House on the Trailer permits to open their little house building business and then turned around and outlawed them. I sure as hell hope and pray they sue the county and city and bankrupt them! I looked into one to have my widowed elderly mother with health issues live in it, and went to the county permit department and they said “I would have to build a new septic system” $50,000 later and that “I couldn’t move her into it. It is only for a caretaker!” What is the point in asking for a permit? In other words…they are purposefully ruining Little House on the Trailer’s business/livelihood. = Fascism disguised as democracy. [Source]

Compassion for the most desperate members of society seems to be a forgotten American value. And the matrix works harder and harder to corral people into conformity with a particular lifestyle centered around mass consumption and the accumulation of debt. The tiny houses for the homeless movement in L.A. is rooted in more altruistic values including love for thy neighbor and good old-fashioned American ingenuity.

Here, Elvis Summers, the inventor of the tiny houses for the homeless concept walks you through a design-build of a unit he constructed for a 60-year-old homeless neighbor who had been sleeping in the dirt.

This article (Tiny Homes for the Homeless Now Under Attack in California) was originally created and published by Waking Times and is published here under a Creative Commons license with attribution to Isaac Davis and WakingTimes.com. It may be re-posted freely with proper attribution, author bio, and this copyright statement.