Arrest Of 14-Year-Old Student For Making A Clock: The Fruits of Sustained Fearmongering And Anti-Muslim Animus

There are sprawling industries and self-proclaimed career “terrorism experts” in the U.S. that profit greatly by deliberately exaggerating the threat of Terrorism and keeping Americans in a state of abject fear of “radical Islam.” There are all sorts of polemicists who build their public platforms by demonizing Muslims and scoffing at concerns over “Islamaphobia,” with the most toxic ones insisting that such a thing does not even exist, even as the mere presence of mosques is opposed across the country, or even as they are physically attacked.

The U.S. government just formally renewed the “State of Emergency” it declared in the aftermath of 9/11 for the 14th time since that attack occurred, ensuring that the country remains in a state of permanent, endless war, subjected to powers that are still classified as “extraordinary” even though they have become entirely normalized. As a result of all of this, a minority group of close to 3 million people is routinely targeted with bigotry and legal persecution in the Home of the Free, while fear and hysteria reign supreme in the Land of the Brave.

What happened in Irving, Texas, yesterday to a 14-year-old Muslim high school freshman is far from the worst instance, but it is highly illustrative of the rotted fruit of this sustained climate of cultivated fear and demonization. The Dallas Morning News reports that “Ahmed Mohamed — who makes his own radios and repairs his own go-kart — hoped to impress his teachers when he brought a homemade clock to MacArthur High,” but “instead, the school phoned police.”

Despite insisting that he made the clock to impress his engineering teacher, consistent with his long-time interest in “inventing stuff,” Ahmed was arrested by the police and led out of school with his hands cuffed behind him. When he was brought into the room to be questioned by the four police officers who had been dispatched to the school, one of them — who had never previously seen him — said: “Yup. That’s who I thought it was.” As a result, he “felt suddenly conscious of his brown skin and his name — one of the most common in the Muslim religion.”

On Twitter, Anil Dash published a photo, provided by the boy’s family, taken as he was led out in cuffs. Note that he’s wearing a NASA shirt: 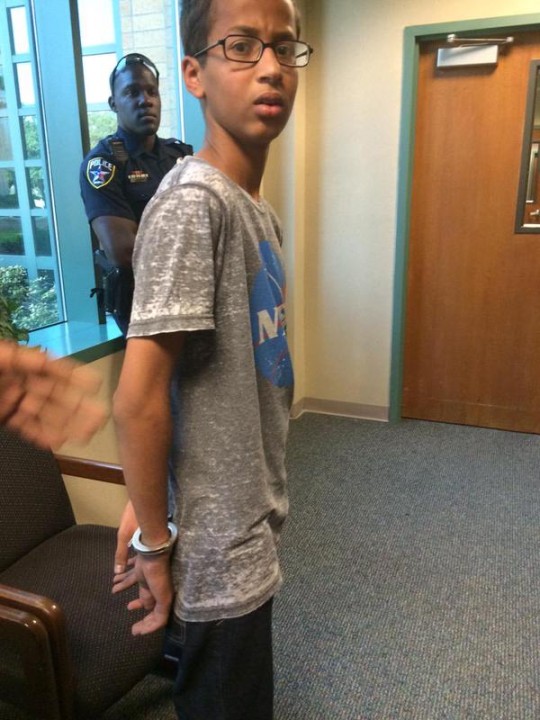 There’s absolutely no evidence that this was anything more than a clock, nor any indication of any kind that the talented and inventive freshman built it as anything other than a school project. But even now, “police say they may yet charge him with making a hoax bomb — though they acknowledge he told everyone who would listen that it’s a clock.” According to the BBC, “police spokesman James McLellan said that, throughout the interview, Ahmed had maintained that he built only a clock, but said the boy was unable to give a ‘broader explanation’ as to what it would be used for.”

The Dallas Morning News let Ahmed speak for himself by posting a video of him recounting what happened. Behold the Terrorist Mastermind:

The behavior here is nothing short of demented. And it’s easy to mock, which in turn has the effect of belittling it and casting it as some sort of bizarre aberration. But it’s not that. It’s the opposite of aberrational. It’s the natural, inevitable byproduct of the culture of fear and demonization that has festered and been continuously inflamed for many years. The circumstances that led to this are systemic and cultural, not aberrational.

The mayor of Irving, Beth Van Duyne, became a beloved national hero to America’s anti-Muslim fanatics when, last February, she seized on a fraudulent online chain letter, which claimed that area imams had created a special court based on sharia law. In response, Mayor Van Duyne posted a Facebook rant in which she vowed to “fight with every fiber of my being” the nonexistent “sharia court.” One anti-Muslim website gushed that Irving “is being called ‘ground zero’ in the battle to prevent Islamic law from gaining a foothold, no matter how small, in the U.S. legal system” and hailed her as “the mayor who stood up to the Muslim Brotherhood.”

That led to support for a bill introduced in the Texas State Legislature banning the use of foreign law, which its sponsor made clear was targeted at least in part at these “sharia courts.” The Irving City Council went out of its way to enact a resolution supporting the state bill. It was enacted in June. One of the City Council members who opposed the bill — William “Bill” Mahone, who “denounced the vote and urged Irving to ’embrace the Muslims’” — then lost his seat in the city election “by a wide margin.” I’ve spoken to Muslim groups in Irving and there is a small but thriving community there, which in turn has produced intense anti-Muslim animus.

Just like Ahmed’s arrest, Irving is representative of the U.S. broadly, not aberrational. The U.S. just a few years ago went into a shameful fit of mass hysteria over a proposed Islamic community center near Ground Zero — as though Muslims generally were guilty of that attack — but since then, in obscurity, ordinary mosques have faced all sorts of opposition from their mere existence, or once they do exist, physical menacing and violence. A 2014 Pew Poll found that Americans feel more negatively toward Muslims than any other religious group in the country.

There are all sorts of obvious, extreme harms that come from being a nation at permanent war. Your country ends up killing huge numbers of innocent people all over the world. Vast resources are drained away from individuals and programs of social good into the pockets of weapons manufacturers. Core freedoms are inexorably and inevitably eroded — seized — in its name. The groups being targeted are marginalized and demonized in order to maximize fear levels and tolerance for violence.

But perhaps the worst of all harms is how endless war degrades the culture and populace of the country that perpetrates it. You can’t have a government that has spent decades waging various forms of war against predominantly Muslim countries — bombing seven of them in the last six years alone — and then act surprised when a Muslim 14-year-old triggers vindictive fear and persecution because he makes a clock for school. That’s no more surprising than watching carrots sprout after you plant carrot seeds in fertile ground and then carefully water them. It’s natural and inevitable, not surprising or at all difficult to understand.