Police Departments Nationwide Forced To Give Back Grenade Launchers, Bayonets And Tanks

The ban effects weapons like grenade launchers and bayonets and a variety of armored vehicles. 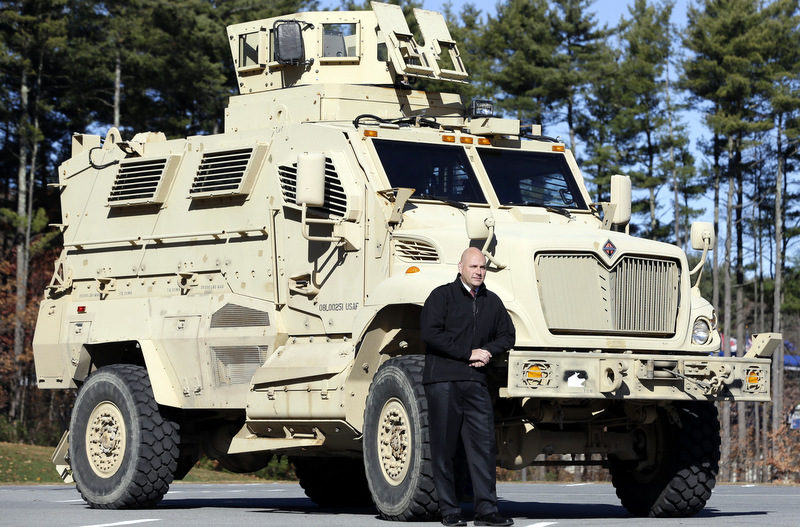 President Barack Obama recently moved to ban police departments from receiving a range of “military style” weapons and equipment. The ban effects weapons like grenade launchers and bayonets and a variety of armored vehicles. Apparently still kosher are the now commonplace assault rifles that nearly all police departments now equip their

END_OF_DOCUMENT_TOKEN_TO_BE_REPLACED

VirTra’s pain compliance training operates on the theory that officers who hesitate to take action, “effectively training them to shoot first and ask questions later.” Officer James Peters is well known in Scottsdale, Arizona for having shot and killed six people in the course of only ten years on the force. Between 2002 and 2012, Officer Peters was constantly in the news for shooting someone new, each time the shootings being ruled justified. But how could so many cops go their whole careers without shooting

END_OF_DOCUMENT_TOKEN_TO_BE_REPLACED

The Royal Canadian Mounted Police officers claimed that the dog, Duke – or apparently “Dukie” – had attacked one of their police canines. “Get a shotgun and take this dog out,” one officer can be heard yelling, as another storms towards the restrained canine. A video that recently surfaced on Facebook shows the officers drag a man from his home and subsequently execute a dog on the premises that was no threat to them at all. The dog was wagging his tail and had attacked no

END_OF_DOCUMENT_TOKEN_TO_BE_REPLACED

Normally, the school would be prohibited from these sorts of “random” drug tests, without probable cause. But the administrators found a loophole. Students at Crivitz High School will face drug tests throughout the new school year. Administrators say that the tests will be carried out at “random” but many suspect that particular students will be targeted, based on their appearances, while others will be left alone. “The last couple years, I’ve noticed here in the high school we’ve started

END_OF_DOCUMENT_TOKEN_TO_BE_REPLACED

The commune in Arlington, Texas, was subject to a raid all because police had convinced themselves that the community “must” be growing marijuana. A SWAT team composed of between 15 to 20 officers raided an organic farm, named the “Garden of Eden” and it was all because they mistook tomato plants for marijuana! The commune in Arlington, Texas, was subject to a raid all because police had convinced themselves that the community “must” be growing marijuana. A federal lawsuit filed by

END_OF_DOCUMENT_TOKEN_TO_BE_REPLACED

The police tried to argue that Farrell was “depressed” from an argument with his fiancee, and he ultimately “wanted to die.” A disturbing video has emerged during the course of the trial for a Charlotte, North Carolina police officer. Officer Randall Kerrick has been charged in the fatal shooting of an unarmed African American who was just looking for help after a car accident. The Daily Mail released the video of Jonathan Farrell being shot back in 2013, showing the

END_OF_DOCUMENT_TOKEN_TO_BE_REPLACED

Interview With Officer Darren Wilson Reveals His Not So Subtle Racism

“They’re so wrapped up in a different culture than—what I’m trying to say is, the right culture, the better one to pick from.” Back when Officer Darren Wilson gunned down Mike Brown in Ferguson, Missouri, many – most – believed there was a racial element to the shooting. Now, in a new interview with the New Yorker’s Jake Halpern, it has finally come out that Wilson is very much racist after all… and Halpern calls him out on it! That interview with Wilson, took place at