The corporate media reached an all-time low last week in its one-sided reporting on Venezuela.  Wil H. Hylton in a lengthy article in New York Times‘ magazine section compared jailed opposition leader Leopoldo López with Martin Luther King. Throughout the article, Hylton weaves together the topic of King’s employment of civil disobedience in the struggle to achieve equality for African-Americans and the protests promoted by López in 2014 known as the «guarimba.» The comparison has to be seen as part of an ongoing effort promoted by international actors including the Trump administration to demonstrate that the Maduro government is a dictatorship or a dictatorship in the making. The comparison falls short for a number of reasons.

In the first place, the four-month «guarimba» in 2014 and again in 2017 had as its principal objective the achievement of regime change. This goal was embraced by the protesters in spite of the fact that the opposition parties (including López’s Popular Will party), which would have assumed power had the guarimba been successful, are highly unpopular – they are certainly not any more popular than the Chavista movement. Unlike King’s civil rights movement with its well-defined concrete objectives, Lopez’s guarimba protest was an insurrectional movement. López publicly declared that the guarimba would continue until the Maduro government was ousted.

In the second place, the tactics employed by the “guarimberos” stood in sharp contrast with King’s commitment to pacifism. Most important, there was no clear, well-defined separation between the «peaceful» guarimberos who built barricades consisting of boulders, trees and fires and placed oily substances on sidewalks resulting in numerous casualties of motorcyclists, on the one hand, and the violent guarimberos responsible for the death of six National Guardsmen in 2014 and the guarimberos of 2017 with their para-military appearance, on the other hand.

In the third place, opposition leaders supported the violent guarimberos in concrete ways. One of the opposition’s main slogans «freedom for the political prisoners» made no distinction between those who had engaged in violence and those who didn’t. In 2017, Freddy Guevara, Popular Will’s maximum leader in the National Assembly, met with and gave counseling to the hooded guarimberos who engaged in confrontational and at times violent tactics. By conveniently passing over these facts, Hylton is able to deny any tie-in between the “peaceful” and non-peaceful protests. 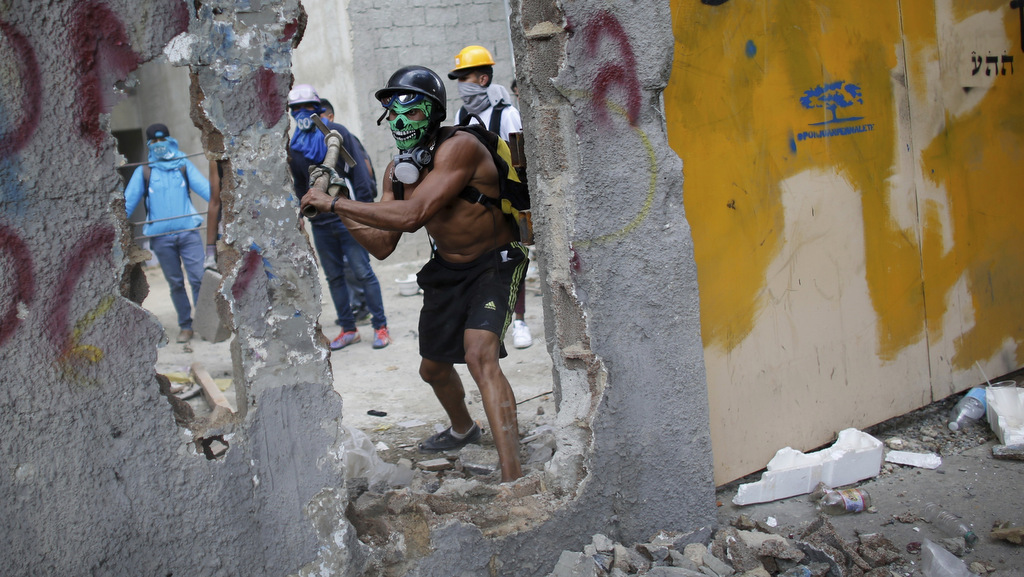 A masked anti-government demonstrator breaks down a wall to release pieces of concrete to throw at police during a protest against the installation of a constitutional assembly in Caracas, Venezuela, Aug. 4, 2017. (AP/Ariana Cubillos)

In the fourth place, the expressions of intolerance and even hatred also contrasts with everything that King stood for. Just one example was the incidents of the capturing of Chavistas and policemen to humiliate or inflict harm on them. Gurimberos in 2017 set fire to Chavista Oscar Figueroa resulting in his death. Hylton makes no mention of these incidents in his cherry-picking article.

Hylton’s article is replete with other deceptive statements and omissions. Just one will suffice. Hylton discusses López’s family lineage dating back to Simón Bolívar and Cristóbal Mendoza, the nation’s first president. But no mention is made of the fact that his grandfather was the brother and close business associate of Eugenio Mendoza, the Rockefeller of Venezuela for many decades. While Hylton recognizes López’s wealthy background, the fact that he was born into the richest family in the nation would detract from the author’s narrative of López as a champion of the poor. Are these omissions coincidental or are they part of an attempt to paint a glorified image of López even at the expense of basic journalistic principles?

By publishing the article the Times is not only sacrificing journalistic principles. It is helping to place on center stage an opposition radical who is well positioned to lead any movement that succeeds in removing Maduro from office. Opposition radicalism in the Venezuelan context is synonymous with the playbook that ousted Chávez on April 11, 2002, dissolved the nation’s main democratic institutions, delayed presidential elections for up to one year, hunted down Chavista leaders, and initiated bloody repressive actions against the popular movement. López, as mayor of Chacao (one of Caracas’ wealthiest municipalities), played an active role in these events, a fact completely ignored by Hylton. The April 2002 strategy of effectuating a radical break with the Chavista past implied the implementation of neoliberal formulas, shock-treatment style.

Hylton makes the dubious claim that in the U.S. political setting López “would probably land in the progressive wing of the Democratic Party.” In fact, the radical brand that López is identified with once in power will translate itself into witch-hunts of Chavistas at all levels under the slogan of «no to impunity,» as well as purges of the armed forces, the state oil company and the state in general. The repression of the Chavistas will open the way for tough, unpopular neoliberal measures. The electoral road to power precludes such sweeping changes, thus explaining the policy of electoral abstention favored by the radicals on the right including López. The New York Times, by glorifying leaders of the ilk of López, is demonstrating that the support of the U.S. liberal establishment for popular pro-working class reforms on the nation’s domestic front does not extend to third-world countries.

Steve Ellner is a Participating Editor of Latin American Perspectives and is the coordinator of that journal’s January 2019 issue that will be titled “Latin America’s Progressive Governments: Separating Socio-Economic Breakthroughs and Shortcomings.”