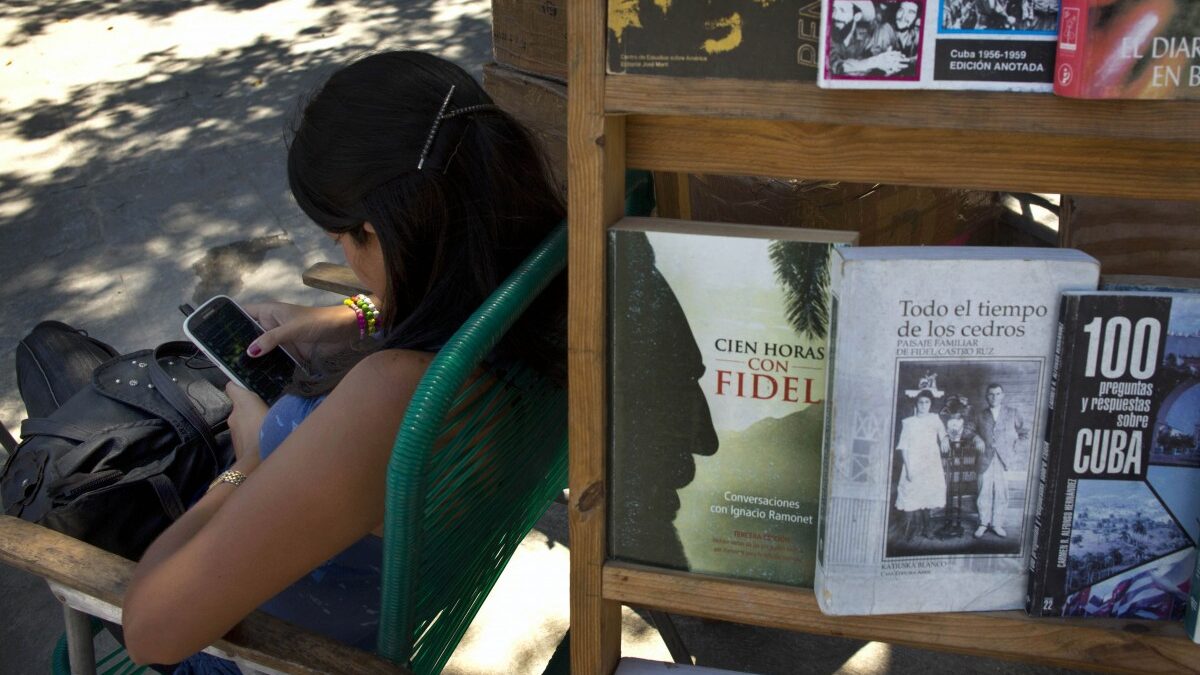 US Penned Political Satire To Sow Dissent In Cuba In this April 1, 2014, photo, a book street vendor passes the time on her smart phone as she waits for customers in Havana, Cuba. (AP/Ramon Espinosa)

WASHINGTON — Draft messages produced for a Twitter-like service in Cuba that the U.S. government secretly funded were overtly political, documents obtained by The Associated Press show, even though the Obama administration has said the program had a more-neutral purpose.

The early messages poked fun at the Castro government and were created by a political satirist working for the social media project. Those messages conflict with the U.S. government’s earlier assertions that its program didn’t promulgate political content.

Disclosure of the text messages came as the head of the U.S. Agency for International Development told Congress in sometimes-confrontational testimony Tuesday that his agency’s program was simply meant to increase the flow of information in a country that heavily restricts Internet access.

An AP investigation last week found that the program, known as ZunZuneo, evaded Cuba’s digital restrictions by creating a text-messaging service that could be used to organize political demonstrations. It drew tens of thousands of subscribers who were unaware it was backed by Washington, which went to great lengths to conceal its involvement.

At an oversight hearing Tuesday, Sen. Patrick Leahy, D-Vt., told USAID Administrator Rajiv Shah that the program was «cockamamie» and had not been described adequately to Congress. Shah also faces House and Senate foreign relations committees this week.

Some messages sent to Cuban cellphones had sharp political commentary, according to documents obtained by the AP. One early message sent on Aug. 7, 2009, took aim at the former Cuban telecommunications minister, Ramiro Valdes, who once had warned that the Internet was a «wild colt» that «should be tamed.»

«Latest: Cuban dies of electrical shock from laptop. ‘I told you so,’ declares a satisfied Ramiro. ‘Those machines are weapons of the enemy!'»

Others were marked in documents as drafts, and it was not immediately clear whether they ultimately were transmitted by the service, which the government said ceased in 2012 because of a lack of funding.

One draft message read: «THE BACKWARDS WORLD: 54% of Americans think Michael Jackson is alive and 86% of Cubans think Fidel Castro is dead.» Another called Castro the «The coma-andante,» a reference to Fidel’s age.

«No,» wrote organizers, apparently rejecting that text. «Too political.»

USAID, known worldwide for its humanitarian work, has maintained repeatedly that it did not send out political messages under the project. Leahy asked Shah whether the project’s goal was to «influence political conditions abroad by gathering information about Cuban cellphone users» or «to encourage popular opposition to the Cuban government.»

«No, that is not correct,» Shah said. «The purpose of the program was to support access to information and to allow people to communicate with each other,» he said. «It was not for the purpose you just articulated.»

A USAID spokesman did not respond to a request seeking comment late Tuesday.

State Department deputy spokeswoman Marie Harf last week said that «no political content was ever supplied by anyone working on this project or running it. It was the people — the Cuban people on the ground who were doing so.»

«When it started, the folks who operated it put weather content on it, sports content on it to get it up and running, but no political content was ever supplied by anyone working on this project or running it,» Harf said.

However, Alen Lauzan Falcon, a Havana-born satirical artist based in Chile, said Tuesday that he was hired to write the political texts, though he was never told about ZunZuneo’s U.S. origins.

«I don’t do cultural humor,» he said. «I do political humor. Everything I do is politics even if it is humor about politics.»

«Obviously it has to be covert. There is no way you can do something like this in Cuba without someone paying a price,» he said.

Some lawmakers in Washington have expressed support for ZunZuneo since the AP’s original disclosure. Sen. Bob Menendez, D-N.J., the chairman of the Senate Foreign Relations Committee, which Shah was to address Thursday, said USAID should be applauded for giving people in Cuba a less-controlled platform to talk to each other.

Rep. Ileana Ros-Lehtinen, a Florida Republican on the House Foreign Relations Committee, before which Shah is to appear Wednesday, has said USAID is not a «secret organization.»

But Leahy and other lawmakers questioned how thoroughly Congress was informed of the project. They have said it has been described only in broad terms and they were given no indications of the program’s risks, its political nature or the extensive efforts to conceal Washington’s involvement.

Shah said Congress has been notified about this program every year since 2008 in documents outlining USAID’s budget. «The fact that we are discussing it in this forum, and that it is an unclassified program, illustrates that this is not a covert effort,» he said.

He said «parts of it were done discreetly» to protect the people involved. He cited a study by the Government Accountability Office into democracy promotion programs run by USAID and the State Department — including the Cuban Twitter project — that found the programs to be consistent with the law. But the author of the GAO study told the AP this week that investigators did not examine the question of whether the programs were covert.

The program’s effects could be far-reaching. Leahy said USAID employees have been contacting the oversight committee to complain that such secretive programs put them at risk because they drive perceptions that the agency is engaged in intelligence-like activities.

«We’re already getting emails from USAID employees all over the world saying, ‘How could they do this and put us in danger?'» Leahy said.

The launch came months after American contractor Alan Gross was arrested in Cuba. He was imprisoned after traveling repeatedly on a separate, clandestine USAID mission to expand Cuban Internet access using sensitive technology that only governments use.

Early Tuesday, Gross’ lawyer released a statement that his client was going on a hunger strike. The ZunZuneo story was «one of the factors» Gross took into account in connection with his hunger strike, the attorney said.

«Once Alan was arrested, it is shocking that USAID would imperil his safety even further by running a covert operation in Cuba,» said the lawyer, Scott Gilbert. «USAID has made one absurdly bad decision after another.