Like the United States, Australia's Prime Minister announced today that his country is considering the possibility of transferring its embassy in Israel from Tel Aviv to Jerusalem. The announcement has been said to be geared towards internal elections in Canberra, an attempt to win the votes of Jewish voters in the district. Australian Prime

END_OF_DOCUMENT_TOKEN_TO_BE_REPLACED

New Saudi king Salman bin Abdul Aziz has devoted himself to what Saudi Arabia calls “the blatant Iranian expansion” into the Saudi sphere of influence. Turkey's President Recep Tayyip Erdogan, left, meets with Saudi King Salman, in Riyadh, Saudi Arabia, Monday, March 2, 2015. The meeting marks a thaw in diplomatic ties between Saudi Arabia and Turkey, which had been tense under the late Saudi King Abdullah largely due to Erdogan's criticism of Egypt's military-led ouster of Islamist President

END_OF_DOCUMENT_TOKEN_TO_BE_REPLACED

The slogans — written in Hebrew — included ‘Death to Arabs’ and ‘Glory to Jews’ as well as the phrase ‘Price Tag. Palestinians stand inside a mosque vandalized and torched by suspected Israeli extremists in the village of Jabaa, near Bethlehem, Wednesday, Feb. 25, 2015. Photo: Mahmoud Illean/AP Israeli settlers torched two cars belonging to Palestinians and spray-painted anti-Arab slogans on the streets of a village in the occupied West Bank at dawn

END_OF_DOCUMENT_TOKEN_TO_BE_REPLACED

Like it or not, Hezbollah is a feature of the Middle East’s new political landscape. It is an important ally in one of the two axes of power taking shape in the region. Hezbollah fighters stand on their armed vehicles and hold their party flags, as they parade during a rally to mark the 13th day of Ashoura, in the southern market town of Nabatiyeh, Lebanon, Friday, Nov. 7, 2014. Lebanon has been supplanted on the international agenda by other more dangerous arenas. Think tanks and strategy centers have lost

END_OF_DOCUMENT_TOKEN_TO_BE_REPLACED

US General: Iranian Presence In Iraq Could Be Beneficial

The official’s statement comes as Iraqi forces closed in on Tikrit Tuesday on the second day of Baghdad’s largest operation yet against the Islamic State of Iraq and Syria (ISIS) group. 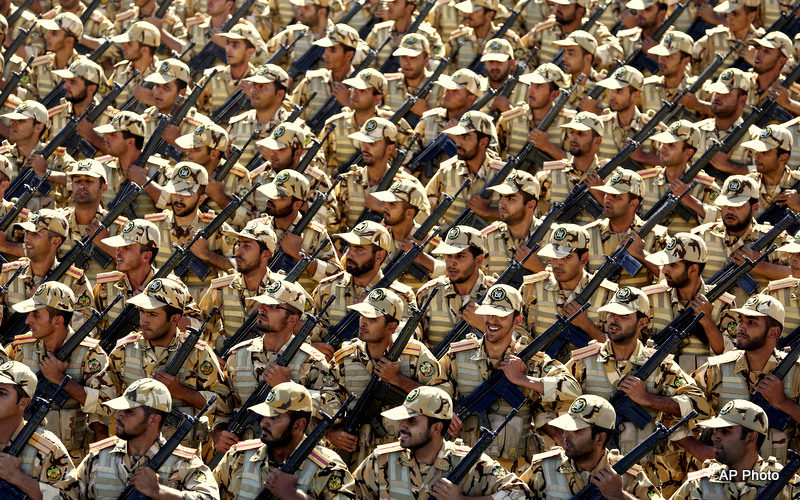 Members of the Iran's army march during an annual military parade marking the 34th anniversary of outset of the 1980-88 Iran-Iraq war, in front of the mausoleum of the late revolutionary founder Ayatollah Khomeini just outside Tehran, Iran, Monday, Sept. 22, 2014. Iran's role in an Iraqi military offensive to recapture Tikrit could be

END_OF_DOCUMENT_TOKEN_TO_BE_REPLACED

«We came here to let the world know that, although this organization presents itself as representative of American Jewry and of course, the state of Israel, the so-called Jewish state,» he said. «It doesn’t represent Judaism in any manner, shape and form.» A group of activists protest outside the Washington Convention Center where American Israeli Public Affairs Committee (AIPAC) is holding its annual meeting on March 01, 2015 Five activists were arrested Sunday in the American capital for demonstrating outside the Washington Convention Center where the American Israeli Public Affairs

END_OF_DOCUMENT_TOKEN_TO_BE_REPLACED

Israeli Settlement Building Up 40% In 2014: Watchdog

More than 600,000 Israeli settlers, soaring from 189,000 in 1989, live in settlements across the West Bank and occupied East Jerusalem, in contravention of international law. A Palestinian laborer works at a construction site in the Jewish only West Bank settlement of Maale Adumim, near Jerusalem. The number of homes under construction in illegal Israeli settlements in the Israeli-occupied West Bank rose last year by 40 percent, the Peace Now anti-settlement watchdog said Monday. The Israeli group said the